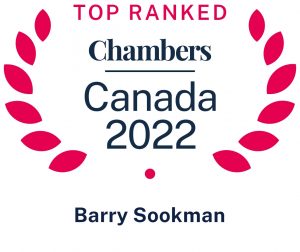 Barry Sookman is a senior counsel  with McCarthy Tétrault in the Toronto office. He is the former Co-Chair of the firm’s Technology Law Group and was the head of the firm’s Internet and Electronic Commerce Group. Prior to that, he was head of its Intellectual Property Group for six years. He is one of Canada’s foremost authorities in the area of information technology, intellectual property (including copyright), and privacy, data and anti-spam law.

Mr. Sookman is very experienced in providing advice in connection with complex information technology/intellectual property transactions including outsourcing and other strategic procurement relationships, cloud computing, SAAS, joint venture transactions, and licensing. He has been involved as lead lawyer in Canada’s biggest and most complicated domestic and international outsourcing and cloud computing deals. He regularly acts on transactions which must meet regulatory requirements including the OSFI-B10 Outsourcing Guideline. He also provides advice in connection with protecting and exploiting intellectual property and new media products.

He also has extensive experience assisting clients in conducting business over the Internet including drafting web site terms and conditions and meeting regulatory requirements such as for writings and signatures.

Barry Sookman also has a myriad of experience dealing with privacy and data protection issues including compliance with PIPEDA and the CPPA, and cross-border data flows. He is also one of Canada’s leading lawyers on Canada’s anti-spam law CASL. This includes giving advice in connection with CRTC investigations and in connection with CASL’s private right of action.

Barry Sookman is also very active in issues and projects associated with artificial intelligence. He is a member of the Wellness AI Ethics Committee (a B.C. Supercluster project).

In addition to providing strategic advice in connection with high-profile IP matters, he has been involved as counsel in numerous leading IP cases and has appeared in the Supreme Court of Canada nine times. His cases  include the following:

He has had extensive involvement in government relations activities and has appeared on numerous occasions before Parliamentary committees including in relation to amendments to the Copyright Act, Canada’s anti-spam law (CASL), and the Trans-Pacific Partnership (TPP). Recent submissions to or appearances before government and agencies include:

Barry Sookman also has a substantial following in social media. He is a leading Canadian blogger on copyright, Internet, and information technology issues at his blog barrysookman.com which has been recognized in the 2012 and 2013 Clawbies. He also has a large following on Twitter @bsookman and LinkedIn @bsookman.

Mr. Sookman has consistently been ranked by authoritative Canadian and international guides as the top or among Canada’s top information technology, intellectual property, and privacy lawyers. For example:

Chambers Canada and Chambers Global  (2005-2022) Information Technology: Consistently ranked in Band 1 or as a “Star Individual” (higher than Band 1). “He wears the IT crown”. “Barry Sookman’s clients consider him to be in a class of his own in Canada – no one else has his depth and breadth of knowledge and technological expertise.”  “Peers especially highlight his commercial IT and IP work, particularly in relation to copyright litigation and procurement transactions.” Clients describe him as “lucid in his approach and capable of absolutely brilliant advice.” “Barry Sookman is reputed for his top-rated copyright practice. He leads the firm’s technology law group and is recognized as a leading practitioner in this area.” “He is very talented”. He “is a leading light in Canada for IT and comes highly recommended for his knowledge of computer, internet and e-commerce law.” “He has an IQ of 190 zillion; he is remarkable. He is incredibly thorough, is very perceptive and quick.” He “is recognised for his knowledge of both IT and IP law, and is also well regarded for copyright work.” “He is one of only a few lawyers with that type of expertise.” “Barry Sookman is a name that stands out in Canada for IT. He is widely acclaimed for his knowledge of computer, internet and e-commerce law. One interviewee enthused: “He is terrific, awesome – a great speaker and educator.”” “Sources describe Barry Sookman as “the pre-eminent lawyer in the sector,” and say: “He puts law in the context of business and keeps on top of the legislation.” He is a renowned authority on IT, internet and copyright matters.” “Barry Sookman is outlined as being “in a class of his own.” One of the pioneers of Canadian IT law, he offers unparalleled depth in outsourcing work and litigious matters, and utilises his IP expertise to assist clients with a range of multidisciplinary work.” “Star individual Barry Sookman is widely respected as “one of the leading lawyers in Canada” for technology law, offering unparalleled multidisciplinary proficiency in IP concerns. He wins the widespread respect of his peers for his extensive expertise in outsourcing and for his prowess as a litigator: “He is a total force in this area – he is outstanding.” One client enthused: “He is the best in Canada and has to be one of the best lawyers internationally I have ever dealt with.“” “Barry Sookman is regarded as a “phenomenal lawyer” with unparalleled proficiency in technology law and IP concerns. Viewed as an “expert in his field,” he is acclaimed for his ability to navigate a complex area of law and to “convey it in a way that is understandable.” He is also revered for his thought leadership.” “Barry Sookman is regarded as an eminent lawyer in the field, with unparalleled expertise in technology and IP matters. Peers view him as “an educator to the sector” and “one of the leading lights in Canada.” “Barry Sookman operates a market-leading practice which focuses on technology law and e-commerce issues, including the associated IP concerns. Market commentators say: “He’s a really good IT lawyer.” “He has significant experience advising clients on major outsourcing and licensing agreements.” “Barry Sookman remains a premier figure in the field and is lauded as “one of the foremost scholars in the country.” He comes highly recommended by both clients and peers, with interviewees admiring his “soft client relationships skills” and “unparalleled ability to strategise.” He regularly advises on the most complex and cutting-edge IT and IP transactions in the market.” “Barry Sookman draws acclaim from clients as “a knowledgeable, steady hand who gets the job done, develops our team and is a tough negotiator.” He is a pre-eminent technology lawyer with vast experience in complex negotiations including systems integration deals and licensing agreements.”” “Barry Sookman is a pre-eminent Toronto-based technology lawyer with vast experience in complex negotiations including systems integration deals and licensing agreements.”He definitely remains a household name.” “He is the godfather of the market.“”

Who’s Who Legal: Canada Data 2020-2021 Privacy Lawyer “Barry Sookman has an “immaculate reputation” as a “huge player in the tech sector” thanks to his broad practice encompassing IT, privacy and security issues.” “Barry Sookman stands out as a “heavy hitter” with a wealth of knowledge pertaining to anti-spam law, cross-border compliance issues and the full range of IP matters.

Who’s Who Legal: Canada (2011-2021) Canada: Information Technology Lawyer, Internet Lawyer, e-Commerce Lawyer and Data Protection Lawyer.  Technology Media & Telecommunications: “Most Highly Regarded” Individual. “Peers describe him as a “seasoned lawyer” who is in a “class of his own”. “He is “the doyen on internet work” and is a “legend”. “Barry Sookman is described by peers a ‘world class’ and ‘an inspiration for other lawyers operating in this space’.” “Barry Sookman is in “a class of his own” according to our sources. Based in Toronto, his practice encompasses information technology and intellectual property matters including outsourcing, joint ventures, and licensing”. “Barry Sookman is a “major player” in the field and one of Canada’s “pre-eminent” practitioners advising upon information technology, internet, copyright and privacy law matters. He is described as practising at the forefront of the discipline and “has a close eye on industry developments.”” “Barry Sookman is a “knowledgeable and experienced” litigator, having acted in large matters involving Apple Canada, Nintendo of America and Sega Enterprises.” “Barry Sookman stands out as a dedicated IT lawyer who is held in high regard for his work advising clients on internet and IP matters.”

Lexpert/American Lawyer Guide to the Leading 500 Lawyers in Canada published by Lexpert and American Lawyer (2003-2021): Top-ranked lawyer in Computer & IT Law, Technology Transactions and Intellectual Property.

IAM: The World’s Leading patent and Technology Licensing Lawyers (2011-2017): “Barry Sookman garners plaudits for his commercial awareness and ‘enterprising approach’ to licence agreements”; among “’the absolute elite of licensing experts’. He maintains a thriving practice encompassing IP and IT transactions for an international clientele.” “Barry Sookman has a wealth of experience in tech. he excels in transactions.” Barry Sookman “brings experience and quality to the table and is a pleasure to learn from.” “Barry Sookman is quick to spot monetisation opportunities.”

Guide to the World’s Leading Technology, Media & Telecommunications Lawyers (2008): Ranked as the number one lawyer in Canada and among the world’s top three lawyers in the technology, media and telecommunication category.

Who’s Who Legal: The International of Who’s Who of Business Lawyers (2008-2013): Described as the “highly capable Co-Chair of the Technology Group and former head of the Internet & e-Commerce Group.”

Legal Media Group Best of the Best, Guide to the World’s Leading Lawyers (2009): Listed as one of the top Information technology experts in the world.

Legal Media Group Best of the Best, Guide to the World’s Leading Lawyers (2005):  Ranked as the top lawyer in Canada and listed among the Top 10 lawyers in the world in the fields of technology, media and telecommunications.

PLC Which Lawyer? (2008): Ranked as a “Highly Recommended Individual” in the outsourcing category and as one of two leading individuals in the telecom and IT category.

Mr. Sookman’s books have been cited, referred to or quoted from approvingly in numerous cases such as:

Mr. Sookman’s expertise as a copyright lawyer and technology lawyer was recognized by Justice Morden of the Ontario Court of Appeal in Delrina Corp. v. Triolet Systems Inc., 2002 CanLII 45083 (ON CA) where he awarded costs to his client at a higher scale given Mr Sookman’s “special expertise stating “It is demonstrated to our satisfaction that Mr. Sookman possesses the special expertise referred to in the tariff, an expertise which is relevant to this case.  His practice area lies in intellectual property, technology law, and related subjects, and he is the author of three substantial texts in this field.  We have no doubt that this experience was particularly relevant to the preparation and presentation of this appeal.”

Mr. Sookman has appeared on the cover of Lexpert magazine three times:

Mr. Sookman has also appeared on the cover of CBA National magazine’s September 2013 “Is your law firm exposed to cyber-espionage?”

Mr. Sookman holds a BA from Concordia University (Interdisciplinary Studies in Science and Human Affairs) and a Master’s in Environmental Studies (MES) degree from York University (1980).

One thought on “Bio & expertise”

This site is published by Barry Sookman personally. It is not affiliated with McCarthy Tétrault or any of its clients. Full bio here.