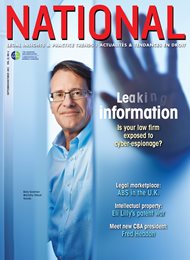 The Association of Corporate Counsel, Year in Review, June 22, 2018

April 7, 2014 – OBA: Countdown to Canada’s Anti-Spam Legislation: Make Sure You Are Ready

April 25, 2012 – Law Society of Upper Canada: Old Rules for New Issues with New Media: Is There a Gap in IP Law? Employment Law and the New Workplace in the Social Media Age

September 20, 2012 – Law Society of Upper Canada, The Twelve-Minute Civil Litigator 2012: Impact of the Internet on Contract Law and the Principles of Offer and Acceptance (Century 21 Canada v Rogers Communications)

August 5, 2011 – ABA: Forum on the Entertainment and Sports Industries: CyberRogues and Web Pirates! New Frontier of Counterfeits and Squatters in Film, Fashion & Music

May 19, 2009 – TCLG & E-Commerce Section of OBA: Year in Review, Developments in Computer, Internet and E-Commerce Law

March 30, 2008 – Insight Conference: (Moderator) Global Licence for the Monetization of the File-Sharing of Music on the Internet

February 15, 2005 – “Implications of the Patriot Act on Outsourcing in Canada,” (Chair) IT Canada Roundtable

April 8, 2005 – “Is Copyright Keeping Up With Changes in Technology?” CBAO Conference on Technology In Bloom

September 15, 2005 – “Technological Protection Measures: Do the Anti-Tampering Provisions Go Too Far, or Not Far Enough?” Insight: Copyright Reform in Canada

May 29, 2002 Insight –Jurisdiction and the Internet

February 12, 2001 Canadian Institute – Due Diligence in Internet and E-Commerce Transactions

December 9, 1999 – Liability Without Leaving Home: The Law of the Internet – The Canadian Institute

November 19, 1999 – Knowledge-Based Businesses: The Businesses of the Future – Pitblado Lectures – The Law Society of Manitoba

September 13, 1999 – Security and Confidentiality Issues in E-Commerce – The Institute for International Research

April 18, 1998 – Copyright and the New Digital Agenda, New Developments in Communications Law and Policy: Towards the Millennium, Law Society of Upper Canada

June 19 & 20, 1995 – Insight Conference – “The Business of Licensing and Merchandising Legal and Practical Issues for Successful Licensing”

Why the CRTC should endorse FairPlay’s piracy site-blocking plan, February 2018

Why Canada has nothing to fear over TPP and Intellectual Property Financal Post January 6, 2016

More Fickle than Fair: Why Canada Should Not Adopt A Fair Use Regime (with Dan Glover) The Lawyers Weekly,

April 18, 2000 Television Interview with CBC – Copyright and the Internet

Other presentations to Members of the Public

May 25, 2016 – ALAI Canada, Reimaging Copyright Board – Lessons from Other Jurisdictions

March 15, 2016 – Fordham TPP: The Trouble with TPP: Canadians Get Their Chance to Speak out

January 19, 2016 – CIGI Roundtable on Positioning Canada to be a Leader in the Global IP System

March 4, 2014 – A Primer for the Legal Committee of the Global Automakers of Canada: CASL, the Final Regulations, the RIAs and the FAQs

April 5, 2013 – Fordham: 21st Annual Conference on Intellectual Property Law and Policy: Performance Rights in Copyright: Public, Private or “Digital”? Cablevision: How It and Its Doctrines Have Fared Around the World

January 18, 2013 – York University: presentation on CASL and its impacts on universities

June 22, 2010 – Ministry of Government Services IT and e-Commerce law, the Year in Review

February 17, 2010 – Liberal Party Roundtable on the Digital Economy: Copyright, Intellectual Property Protection and the Future of Broadcasting in the Internet Age (Ottawa)

May 28, 2008 – Conference Board: Intellectual Property Rights Conference: A Catalyst for Innovation

March 21, 2007, Booknet Canada: Technology Forum 2007: Digitization and the Future of Canadian Publishing: The Fight over Copyright

March 3, 2006 – Rotman School of Business: “Protection for Technological Measures in Canada — What Should Canada Do?”

May 26, 2004 – “Originality in Copyright Law” (Moderator of panel) ALAI Conference

February 25, 2004 – “New and Changing Business Models for Distribution of Music and Other Content,” MIT/Schulich Enterprise Forum

May 5, 2003 – CIO Summit panellist on Legal Issues in Outsourcing

This site is published by Barry Sookman personally. It is not affiliated with McCarthy Tétrault or any of its clients. Full bio here.